The Rev. Ernest Calvin Williams, Sr. was born in New Haven on March 31, 1922, the son of the late Calvin James and Sarah Cornick Williams.  He Married Gloria Liburd Williams at St. Luke's on August 20, 1950.  The Williams two children are  Eileen Williams and Ernest (Manny) Jr.  His career as a Deacon began with Ordination December 6, 1986 at Christ Church Cathedral in Hartford CT.  He served as Deacon and Assistant at St. Luke’s Episcopal Church New Haven.  Gloria Williams said “Ordination in some form was his goal and he strived most of his life to achieve it.”  Rev. Williams is memorialized in the stained glass windows of St. Luke’s.  He was among the first African American Deacons in the Diocese of Connecticut.  He worked for 17 years at United Illuminating in management positions, the last being the Equal Opportunity Manager.  His work experiences included Winchester Arms, Community Progress Inc. and the State Labor Department.

Rev. Williams served St. Luke’s as a leader, the diocese of Connecticut and the Episcopal Church USA.

His family and The Ernest C. Williams Memorial Committee of St. Luke’s Parish has established the Ernest C. Williams Memorial Library as part of the Archives of the Diocese of Connecticut to perpetuate Ernest’s memory in the hearts and minds of all Vocational Deacons in the Diocese.  It enables candidates for the Vocational Diaconate to have access to a library. The Library was dedicated by The Rt. Rev. Arthur Walmsley, then Bishop of Connecticut.  In 1986 the Diocese resurrected the ancient order of vocational deacons.  Ernest did not serve as a deacon long but his dedication and calling to the greater church will always be remembered. 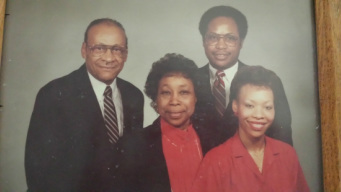