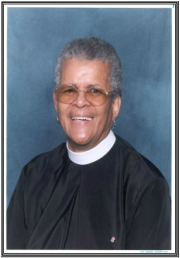 The Rev. Gladys K. Whitney, Prior to her ordination to the Deaconate, Rev. Gladys K. Whitney had a number of careers.  Graduating from Fisk University in Nashville, Tennessee with a BS in Chemistry, she first worked as a Lab Technician at Sydenham Hospital in New York and eventually at the West Haven VA Hospital.  She would eventually tire of the lonely lab atmosphere and went on to teach Lab Technology, Human Physiology, Biology and Chemistry at Richard C. Lee High School in New Haven.  Always a believer in furthering one’s education, Rev. Whitney obtained her 6th year Masters degree from Southern Connecticut State University and would go on to become Assistant Principal at James Hillhouse and Wilbur Cross High Schools and finally at Troop Middle School from where she would retire.


Not one to stay idle for long, Rev. Whitney came out of retirement to become Executive Director of the Mary B. Ashford Adult Day Center in New Haven.  While she was there she continued to further her education, this time taking classes from the University of the South at Sewanee, Tennessee in Education for Ministry (EFM).

Prior to ordination she served on the Vestry, and held the positions of both Junior and Senior Warden.  She was a member of the Lectors and Layreader’s Guild and was a Lay Eucharistic Minister.  Rev. Whitney was ordained to the Deaconate on June 8, 1996 and was first assigned as Deacon to Grace & St. Peter’s Church in Hamden.   Eventually she would be reassigned “home” and has been Deacon at St. Luke’s and retired there.  Rev. Whitney, served as an active, 40+ year member of St. Luke’s Episcopal Church.
St. Luke's Episcopal Church, 111 Whalley Avenue, New Haven, CT. 06511
Phone: 203-865-0141 • Fax: 203-752-1403
E-mail: slchurch1844@snet.net
© St. Luke's Episcopal Church